← more from
Astral Spirits
Get fresh music recommendations delivered to your inbox every Friday.
We've updated our Terms of Use. You can review the changes here. 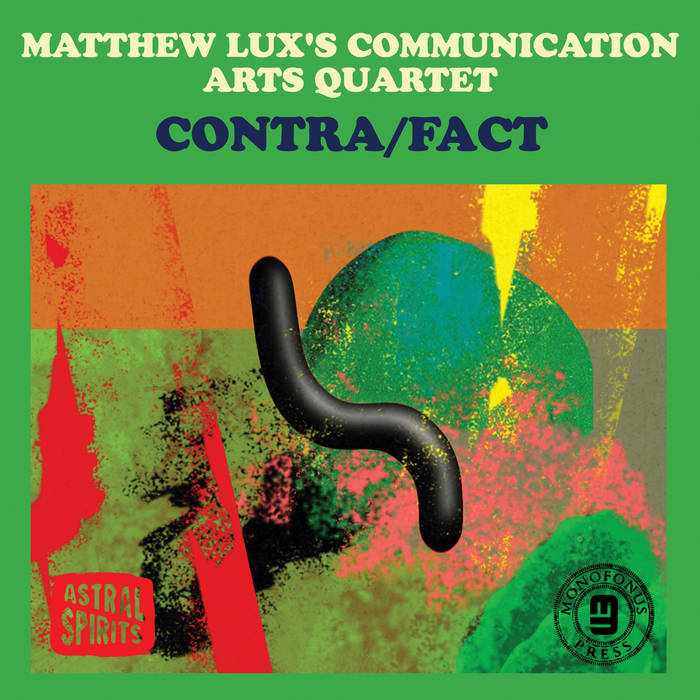 Astral Spirits is proud to ONCE AGAIN present the debut album from MATTHEW LUX as a leader, this time on vinyl. Rather than a direct transfer of the cassette version to vinyl, Lux has gone above and beyond and decided to present the same album but in an entirely different light. Lux got together with LEROY BACH (Wilco) to do an entirely new edit of the album, complete with a new running order, transitions and all. The vinyl version is a bit leaner time-wise than the cassette, but the album as a whole feels more focused and alive. Lux's cohorts in the Communication Arts Quartet have received a bit more recognition over the past year as well with the release of BEN LAMAR GAY's incredible album " Downtown Castles Can Never Block the Sun” (International Anthem) and MIKEL PATRICK AVERY's continued work with Natural Information Society and more. “Contra/Fact” is indeed Matthew Lux’s long-awaited debut as a leader and it’s proven to be an incredibly important and timeless record that deserves to be heard again for the first time.

In addition to the new edits of the vinyl version, Lux worked with Chicago-based video artist KIM ALPERT (www.kimalpert.com) to create an entire suite of videos to go with this new version of "Contra/Fact." There will be an incredibly special and one time only VHS version of the album with Kim's videos that can be purchased in conjunction with the LP. These videos give yet another life to the album that widens the scope of the entire project even further.

LINER NOTES:
When Matt Lux asked me to write something for his record, we met in the Bridgeport neighborhood of Chicago. He parked right where the sorely-missed Lithuanian restaurant Healthy Food used to be. When he was just starting to play, older musicians would take him around town to discover all the special spots. He calls one of his tunes “Paw Paw” after a native fruit which has never gained widespread popularity because it doesn’t travel and must be eaten within days of being picked. Lux passes on knowledge as it was passed on to him.

What do you call this music? I ask and he just shrugs. This isn’t because he doesn’t know what he’s doing or lacks the language to explain himself. Opposites attract him. There are horns, drums, and bass and non-bass guitars on this record but it isn’t jazz. There are electronic blips, wheezes, and barely audible echoes filling the imaginary rooms these numbers conjure. There’s even a human voice or two now and then.

“Space-folk”, he offers, half-joking, I think. This from a guy who’s come to couch his opinions with the caveat that they come from someone who hates Sonny Rollins but loves Culture Club. He tells me that some of the titles of these tunes refer to Biggie Smalls, Colin Kaepernick, and Lester Young, among others. But I won’t tell you which is which because no one wants their work explained away by influences and inspirations. Besides, where one starts is rarely where one finishes, so identifying jumping-off points won’t necessarily help you appreciate where it will end up. I didn’t know any back-stories the first couple dozen times I listened to this record either. Songs must fly on their own wings to survive and his fly their own way whatever he calls them and wherever they came from.

The places they go are sometimes loud, other times quiet, but they always move around in a ruminative sort of way. When they meander, they meander with purpose. Lux named his band the Communication Arts Quartet after a building devoted to that discipline at Walt Disney Elementary, where he went to school as a child. I have to believe the old imagineer himself would be transported were he to hear the music made by this graduate of his namesake institution of learning.

While Lux’s compositions don’t bludgeon you upside the head with their messages, they aren’t willfully obtuse or obscurantist in the way some contemporary instrumental music can be either. Communication’s in the name for good reason. Lux isn’t about making listeners suffer. He wants to make something his mother would enjoy listening to rather than to impress some self-appointed musicologist. He and his bandmates have done the heavy lifting. Drop the needle and let them take you places.

Bandcamp Daily  your guide to the world of Bandcamp